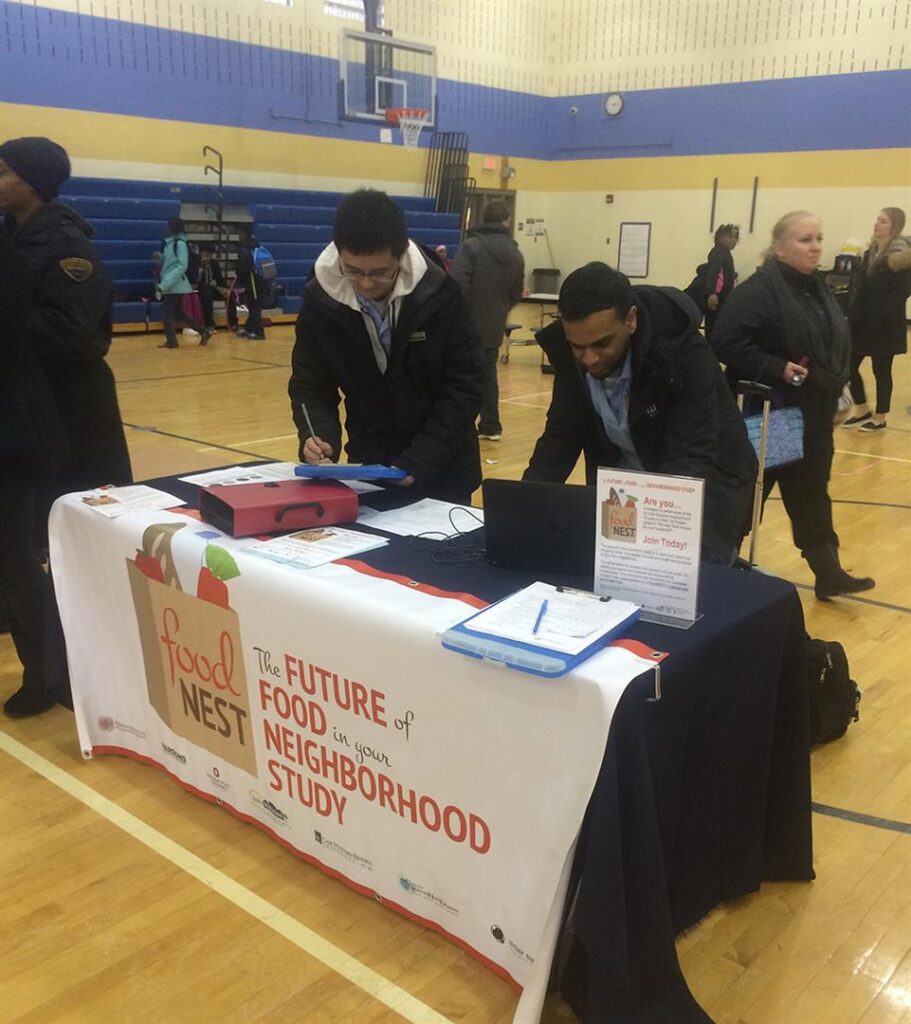 Co-PIs Drs. Darcy Freedman and Ash Sehgal and the Future of Food in Your Neighborhood Study (foodNEST) team have reached a benchmark goal: they’ve completed recruitment of 520 participants in two cities for the three-year study. The foodNEST looks at how changes in a community’s food options affect residents’ nutritional choices and health over time. The study revolves around the opening of a 42,000-square-foot food hub filled with local food suppliers along the East 55th Street corridor in Cleveland’s St. Clair Superior neighborhood, which was previously defined as a food desert. A similar neighborhood, Southside in Columbus, Ohio, was chosen as a comparison. It resembles St. Clair Superior but does not yet have a food hub.
The 520 study participants complete comprehensive 24-hour dietary recalls at baseline, 12 months, and 24 months, as well as a short survey to assess psychosocial and behavioral factors that influence food shopping and diet. Recruiting and retaining such a large number of participants is a massive undertaking. Chaturia Rouse, foodNEST program manager, and the team could provide a playbook for similar such studies.

One of the keys to their recruiting success was enlisting the involvement of community organizations. The study’s biggest source of participants in Cleveland came through word-of-mouth, whereas in Columbus most people in Columbus joined the study through connections made at community events. Rouse said, “We recruited basically everywhere. We were out in both communities a lot for the first several months of recruitment at community centers, businesses frequented by local residents, schools, recreation centers, grocery stores, and more. We were at these places three or four times a week. That generated enough buzz for participants to tell their neighbors, friends, coworkers, and family.”

Working with community partners Morgan Taggart of the St. Clair Superior Development Corporation and Bob Leighty of the Parsons Avenue Merchants Association helped the foodNEST team establish a presence in both communities. The team papered both communities with fliers, postcards, and newsletters. Rouse adds that “All of our fliers and communications were in the same color scheme with the same logo, and they matched the shirts we wore when we were out recruiting. We also sent out hard-copy mailers to almost everybody in both neighborhoods. This sort of triple confirmation—seeing us in the community, seeing the fliers, then getting something in the mail added to the legitimacy and credibility of the study. Our consistency of approach reinforced that it was a legitimate study.”

Indeed, the idea of community assistance was itself a recruitment tool. The foodNEST team sent out a monthly newsletter to all participants during year one of the study, and it has been well-received. “People say they like receiving the newsletters from our team,” Rouse says. “We let them know what we’re up to, events that are going on in their communities, and provide information on other activities related to the foodNEST study, such as the food retail audits.  We also used these newsletters to remind people we were still looking for participants and to spread the word. Building that trust with the community was crucial. It let people know that we’re not just out here collecting data, but that this is a symbiotic relationship, in which we will be sharing  data back to the participants as well.”
In Cleveland, the foodNEST team sent each participant their Healthy Eating Index score and the national average. Rouse states, “All of our surveys are done over phone, not in person, so we want to put enough genuine contact in place to build and maintain rapport.” The participants liked that they received information back from all of the surveys they completed,” she says. “The approach is effective. Now that the study is beginning Year 2 surveys, foodNEST staff are receiving phone calls from participants who know they’re approaching their one-year anniversary with the study, asking when they’ll be surveyed next.

The PRCHN is partnering with the CWRU Center for Reducing Health Disparities as well as researchers at The Ohio State University and University of South Carolina. Rouse states that this team has been absolutely essential to achieving the study’s recruitment goals. “Both our recruitment teams (Tommy To, Stephanie Pike, Jevonna Morris, Ritchie Koshy, Chloe Greene, Donna Bates, Jillian Olinger, Cordell Arellano, and Martia Anderson), and survey teams (Wanda Rhynes, Jackie Leach, Sarah Sebrasy, Heather Tribout, Kristen Heitman, and Brittany Schmidt), were hardworking and personable, which made all the difference.” The next steps for the foodNEST team include Year 2 surveys and food retail audits in Cleveland and Columbus, rolling out a loyalty program at Hub 55, and conducting stakeholder interviews with key individuals in both communities