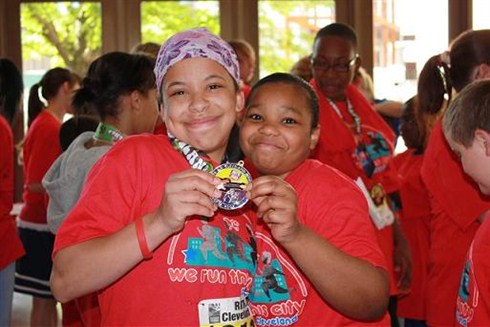 The Ideas Moving Parents and Adolescents to Change Together study—better known as IMPACT—is a three-year intervention program working with Cleveland families to improve their health with a focus on nutrition, physical activity, stress and sleep. Approximately half of the youth are also enrolled in a school that participates in the We Run This City Youth Marathon Program (WRTC), a study-enriched YMCA-sponsored school fitness program that encourages physical activity in urban youth, with IMPACT navigators supporting students, coaches, and the teams.
Spring 2016 marks a major milestone for the IMPACT study: This will be the final race season for IMPACT participants. There are currently 22 WRTC schools with at least one IMPACT participant in the school, with a potential 49 participants eligible to recruit. Some schools have already started training, while the rest will begin in February. IMPACT co-sponsored an in-service for We Run This City coaches on December 4.

Below, each of our IMPACT Navigators shares a few thoughts on this final coaches’ meeting and the start of the final intervention.

Rachel Gardenhire: On December 4, we had our last WRTC coaches’ meeting at the YMCA for the final year of the IMPACT study. This being my first coaches’ meeting, I was not sure of everything that would be in store for the day, but it was a great time to reconnect with our coaches and get inspired and pumped up for this final WRTC IMPACT marathon season. One of the highlights of the day was hearing from our keynote speaker, Liz Ferro, the founder and CEO of Girls with Sole, a nonprofit organization inspiring at-risk girls to get involved in fitness and wellness programs in order to empower themselves. Liz spoke on her experience as a foster child and how she empowered herself through sports, specifically running, to take control of her life. Her words were inspiring and her goal of reaching and empowering young girls in Cleveland to find their own strength and worth was very admirable. I think everyone in the room was touched by her story and heart-felt sharing of her experiences. It was a reminder of what programs like WRTC and Girls with Sole can do for the kids involved in them. I think we are ready for one last impactful season with WRTC and IMPACT!

Kevin Heine: The final We Run This City coaches’ in-service took place in December, and it was a bittersweet event for us here at IMPACT. On one hand, it was wonderful to get together with all of the coaches and YMCA staff that we will be working with this year. On the other hand, the event was a poignant reminder this project has an expiration date. I have enjoyed my time in this program so much, and this in-service was no different. Throughout the course of the day we heard presentations and information about We Run This City, listened to the inspirational Liz Ferro from Girls With Sole, which provides wellness programs for girls; gave a presentation about the IMPACT study; played IMPACT Jeopardy! (I played the role of Alex Trebec); and participated in some sweaty, cutthroat games of bubble soccer. When the day came to a close and all the floor-burns were treated and bandaged, I think that we had a ton of fun, learned some new things, and hopefully spread the message of both the IMPACT study and the PRCHN.

Chante Cavin: The final coaches’ in-service was actually my first attended in-service (I began with IMPACT in February 2015). The day was an amazing experience filled with health education, physical activity, and fun times with coaches. Two activities from the in-service stand out most to me, the first being the speech given by speaker Liz Ferro. Liz gave a touching story of her life growing up in extremely difficult family circumstances. Through her difficulties, Liz founded Girls With Sole, a free fitness and wellness program that works to empower the minds, bodies and souls of girls who are at-risk or have experienced abuse of any kind. Liz’s personal story is remarkably touching and her work to inspire other young women is marvelously courageous and extraordinary. The second activity from the in-service that left lasting memories was Bubble Soccer. Bubble soccer is a silly way to play soccer with each player being inside a giant bubble. The bubble allows for individuals to bump their opponent causing lots of safe falls and tons of laughter.