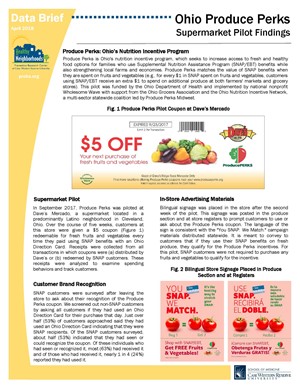 Will grocery store customers use Produce Perks? A new PRCHN data brief documents findings from the supermarket pilot test of the Produce Perks program, Ohio’s nutrition incentive program that seeks to increase access to fresh and healthy food options for families who use Supplemental Nutrition Assistance Program (SNAP/EBT) benefits. Produce Perks matches the value of SNAP benefits when they are spent on fruits and vegetables. This pilot was funded by the Ohio Department of Health and implemented by national nonprofit Wholesome Wave with support from the Ohio Grocers Association and the Ohio Nutrition Incentive Network, a multi-sector statewide coalition led by Produce Perks Midwest. The PRCHN evaluated the pilot program and is pleased to share the results.

How did the pilot work?
Over the course of five weeks, customers at Dave’s Mercado, a supermarket in Cleveland, Ohio, received a $5 coupon each time they paid with an Ohio Direction Card (SNAP) at the register. The coupon was redeemable for fresh fruits and vegetables. The coupons are now fully integrated into the point of sale system and the coupon will be offered in five more Dave’s Markets locations this summer. Additionally, new pilot programs are expected to launch this April and May in East Liverpool and Calcutta, Ohio, at participating Giant Eagles as well as in Toledo, Ohio, within a specialty grocery store, Market on the Green. This program is aimed at increasing access to fresh and healthy food options for SNAP recipients through the distribution of nutrition incentives.

Some key takeaways from the pilot:

Although a number of farmers’ markets throughout Ohio participate in Produce Perks, this was the first time the Produce Perks program was implemented in a large-scale supermarket setting. The initial success of the program has been heartening–it will be expanded to five stores by summer 2018, while continuing to reach customers shopping at more than 85 farmers’ markets statewide.